The exhibition that was going on during my visit to Balboa Park was New Realities: by Jerry Uelsmann and Maggie Taylor.  I had never been to an exhibit quite like this one before.  It involved two separate artists with two different styles, both with their own take on photo-montage.  Photo-montage is when you take two different pictures and combine them to make one image.  Jerry Uelsmann and Maggie Taylor are both seen as pioneers of photo-montage, which made the exhibit much more interesting.  The main difference between the two is the way they create their pictures.  Maggie Taylor is more technological, using a scanner and computers to create her photo-montages, while Jerry Uelsmann does all his work in dark rooms, doing it the old fashioned way.  Another main difference is Taylor’s use of vibrant color versus Uelsmann’s black and white photos.  I found myself trying to decide which photographer I liked better.  I tended to lean more towards Uelsmann’s because I’m a fan of black and white landscapes.  But I also enjoyed plenty of Maggie Taylor’s photos.  It’s amazing what these artists are able to do with their pictures, especially Jerry Uelsmann.  Its hard to believe he does all his work in dark rooms, they are all pretty incredible. 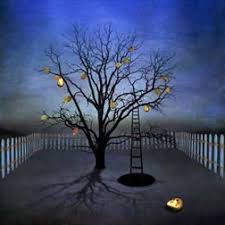