Tonight we attended an “Augmented Reality” show given by the artist Caitlin Fisher.  Is was a cool experience and was something that I had never seen before.  Its like a virtual book that pops up.  The way it works is there are a series of random black and white squares that function sort of lie placeholders for certain images.  Whatever image you want to pop up you place it on on the the black and white square markers.  When a camera or webcam sees these black and white markers, it begins to play whatever audio you may may have assigned to it, as well as making  the images you chose appear to be 3D.

Caitlin Fisher claims that this is the future of art and that it was originally a military program.  I think that it is a very interesting new form of art that could shape the way we tell and read stories to younger generations.  Here are a few picture examples of Caitlin and the Augmented Reality art she does.

This entry was posted on February 9, 2011 by donovanolson. It was filed under My Photography and was tagged with Augmented Reality, Caitlin Fisher, CSUSM. 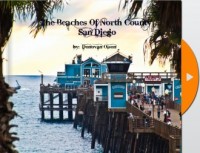